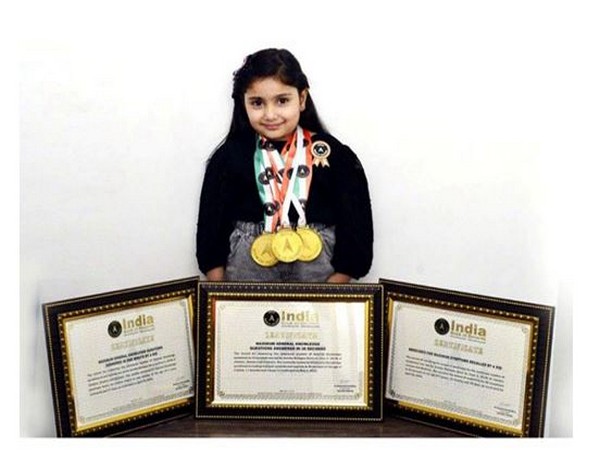 A four-year-old girl has entered into the 'India Book of Records' in three different categories bringing laurels for Jammu and Kashmir and creating history in the country.

Hailing from Jammu, the 3 years and 11 months-old Anvika Mahajan, an LKG student at a private school has broken two old records within a week. She has established these records in the 3 to 7 years category. The first record was held by Anvika by claiming the title of 'Medicine for Maximum Symptoms Record by Kids' in which she recited the chemical names of 20 generic medicines in just 52 seconds.

The record was earlier held by Pratesh Rajesh from Dindigul region of Tamil Nadu who answered 55 general knowledge questions within one minute at the age of 6 years 4 months and 5 days.

However, Anvika broke her own record by answering 67 general knowledge questions in one minute.

Recently he set a record for answering the most questions in thirty seconds. Anvika answered 44 questions in 30 seconds. This record was previously set by Muhammad Rayan KP from Malampur area of Kerala who answered 41 general knowledge questions on national symbols, fruits and months within 30 seconds at the age of 4 years, 7 months and 7 days.

Anvika Mahajan is widely admired for this extraordinary intelligence and ability. Now their aim is to set a record by naming at least 40 medicines in one minute. (ANI)