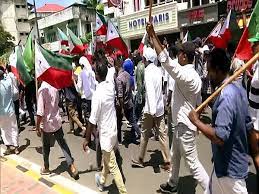 The Central Government on Tuesday declared the Popular Front of India (PFI) and its associates or affiliates or fronts as an unlawful association with immediate effect for a period of five years.

"PFI and its associates or affiliates or fronts operate openly as a socio-economic, educational and political organization but, they have been pursuing a secret agenda to radicalize a particular section of the society working towards undermining the concept of democracy and show sheer disrespect towards the constitutional authority and constitutional set up of the country," said the government notification.

The notification said PFI and its associates or affiliates or fronts have been indulging in unlawful
activities, which are prejudicial to the integrity, sovereignty and security of the country and have the potential to disturb public peace and communal harmony of the country and support militancy in the country.

It further said some of the PFI's founding members are the leaders of the Students Islamic Movement of India (SIMI) and PFI has linkages with Jamat-ul-Mujahideen Bangladesh (JMB), both of which are proscribed organisations.

There had been a number of instances of international linkages of PFI with global
terrorist groups like the Islamic State of Iraq and Syria (ISIS); the PFI and its associates or affiliates or fronts have been working covertly to increase the radicalization of one community by promoting a sense of insecurity in the country, which is substantiated by the fact that some PFI cadres have joined international terrorist organisations, said the notification.

"The Central Government, having regard to the above circumstances, is of the firm opinion that it is necessary to declare the PFI and its associates or affiliates or fronts as an unlawful association with immediate effect, and accordingly, in the exercise of the powers conferred by the proviso to sub-section (3) of section 3 of the said Act, the Central Government hereby directs that this notification shall, subject to any order that may be made under section 4 of the said Act, have effect for a period of five years from the date of its publication in the Official Gazette," it said.

The National Investigation Agency, Enforcement Directorate and the state police forces jointly coordinated searches at the houses and offices of the PFI leaders and members across India.

Searches were conducted at 93 locations in 15 states of India in which over 100 activists of the Popular Front of India (PFI) were arrested.

The searches were conducted in connection with five cases registered by the NIA following "continued inputs and evidence" that the PFI leaders and cadres were involved in the funding of terrorism and terrorist activities, organising training camps for providing armed training and radicalising people to join banned organisations.

A large number of criminal cases were registered in different states over the last few years against the PFI and its leaders and members for their involvement in many violent acts.