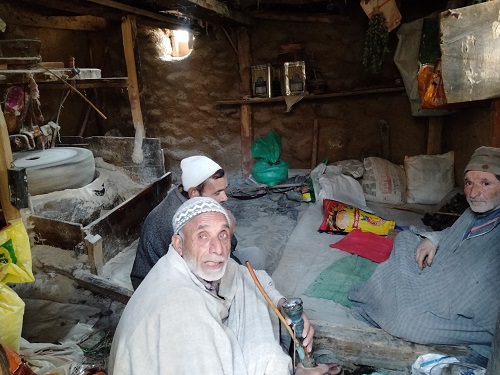 Budgam, Nov 27: The Arizal village of the Khansahib tehsil in central Kashmir's Budgam district preserves the centuries-old tradition of making flour through mills driven by water.
As people in other parts of the valley moved to electrical mills, there are seven water flour mills in this village.
The water flour mill, locally known as Ghratte, is a centuries-old traditional maize, rice and wheat grinding mechanism in Kashmir. They are mostly built in hilly areas where there are abundant water resources.
Abdul Rehman Dar, one of the owners of the water flour mill in the Arizal village, told Rising Kashmir that he has been running the mill for the last 25 years in the village. “Our ancestors used to run this mill for the last 175 years. Our four generations, which include my father, grandfather, and great-grandfather, were using this water mill. It was the main source of income for our family,” he said.
Dar said he has five children who are fully dependent on his income which is generated through the mill. “In 2006, my wife died, and it was difficult for me to take care of small children and continue this work as all the responsibility fell upon my shoulders. After facing a lot of difficulties, I continued this work as this watermill was a gift for me from my forefathers,” he said.
This mill is eco-friendly as it does not create any pollution, Abdul Rehman said.
Abdul Aziz Malik, another watermill owner, said the Arizal village has 13 water mills, out of which seven are functional. “Ours is one of the villages in the district where 13 water mills were functional 10 years ago. After the water level in the nallah decreased, the six water mills had to be closed due to the low water in the nallah Sukhnag,” he said.
Malik has been running the mill for the last 22 years. The people in the various villages are doing intensive cultivation of the maize and rice which they are brought to our mills, which we grind, he said, adding, “Technology has changed people’s lifestyle. Now electrical mills are used, which are fully dependent upon electricity. But these traditional water flour mills are not losing their importance. The wheat, maize, and rice grinded by these water mills are considered healthier than the electrical mills.”
Abdul Aziz, however, said the workflow is very low than what it was some years ago.
Zeba Bano, an old woman from the village, said she has been using homemade maize and rice atta in her home for the last 84 years. "The people from various villages cultivate maize and rice in their agricultural lands. They prefer to use atta from maize and rice which they grind in water mills,” she said.

Four members of family found dead due to asphyxiation in Ramban

Govt Reconstitutes Board Of Directors Of J&K Cements Limited