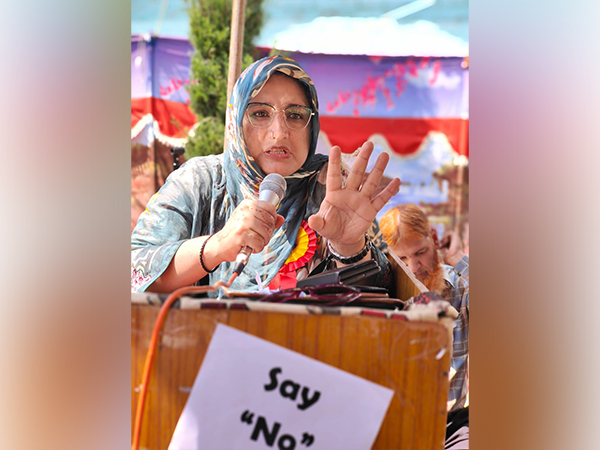 Women, all over the world, are progressing towards greater political participation, yet they often remain underrepresented in politics, especially in municipal governments.

According to various scholars, when women take on leadership positions in the government, they bring about a distinctive experience, which results in gender-inclusive public policies and an overall improvement in the quality of life-- for both women and men. Despite all the good impact and change that women mayors have brought about in their cities, just 20% of mayors worldwide are women.

One such glaring example of change, development and quality of life for citizens is Masarat Kar-- the first woman chief of Sopore Municipal Council, which has 21 wards.

Masarat Kar, 50, is the daughter of the great political figure of Sopore, the late Ghulam Rasool Kar.

Once the hotbed of militancy, Sopore in Jammu and Kashmir is witnessing a complete change in terms of development since Masarat Kar started representing the town in July 2021.

For example, Sopore was waiting for a public toilet for ages but got the facilities under the leadership of Masarat Kar.

Not just that, under her rule, Sopore received upliftment with the installation of street lights, restoration and beautification of pavements. The Sopore town in the Baramulla district got its first fountain and its own clock tower.

Masarat feels that her being in politics or participating in grass root democratic process is to serve the people of her town and area.

"I came forward for my people, for my town to restore the glory of Sopore which once was known as Chota London," she said.

She wants to work tirelessly and relentlessly for the development of her town and more importantly aims to change the opinion that Sopore is the hotbed of militancy or hard-core fundamentalists.

"The people of Sopore town have every right to grow. Why will Sopore suffer or be ignored on a developmental front due to a wrong tag? Sopore was even called Kandhar of Kashmir. Seems few politicians or people love to relate it with terrorism for few brownie points, due to which people here suffer," she added.

Masrat said the scenario has changed and now people in Sopore believe in development, and change and the people of Sopore who have expressed their faith in her, won't be let down by her and the team.

She said that she will work tirelessly to implement her agenda of all-round growth and development of Sopore.

"For the development of Sopore around 21 crores has been approved only for the long pending demand of the deep-drain project. 47 lakhs have also been approved for other schemes," Masarat added.

Talking about the beautification of River Jhelum, Masrat said three ghats would be carved out in this scheme, which will give Sopore a different look and people will enjoy the riverside looks after it is completed.

As per official data, youth in Sopore were getting involved in drugs, but the efforts of Masrat and her team in this direction are beyond words.

Earlier in the month, under 'Nasha Mukt Bharat Abhiyan', a series of awareness programmes were held across the town to generate awareness among the masses, especially youth about the ill effects of drug abuse.

"The aim of the revival project is that these (folk) theatre groups should focus on contemporary issues and happenings that the Kashmir folk theatre was dealing mainly with the issues that were relevant in the past," Masrat Kar said.

"This is high time for its revival. The folk theatre is the main source of communication and public outreach," she added.

Masarat, the town head, has all the qualities of a good leader and is on a mission to change the overall scenario of the Sopore subdivision of the Baramulla district. Looking at the developments, one has to say that she has been successful to a larger extent. (ANI)