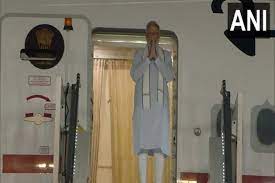 Prime Minister Narendra Modi on Wednesday arrived in New Delhi after attending the state funeral of former Japanese Prime Minister Shinzo Abe who was attacked on July 8 in the city of Nara during a campaign speech and died later that day.

The Prime Minister landed in Japan on Tuesday morning to attend Abe's state funeral, noting the contributions of the late Japanese PM in strengthening the India-Japan partnership and conceptualizing the vision of a free, open and inclusive Indo-Pacific region. PM Modi held a bilateral meeting with his Japanese counterpart Fumio Kishida on Tuesday and conveyed his deepest condolences on the demise of former Prime Minister Shinzo Abe.

Both leaders renewed their commitment to further strengthening the India-Japan Special Strategic and Global Partnership and working together in the region and other international groupings.

Representatives from over 100 countries including more than 20 heads of state and heads of government are expected to participate in the state funeral.

On Monday, foreign secretary Vinay Kwatra said this trip is an opportunity for PM Modi to honour the memory of his dear friend and a champion of India-Japan ties.

"This visit by PM Modi is an opportunity for him to honour the memory of former PM Abe, who he considered a dear friend and a great champion of the India-Japan relationship," the foreign secretary said while addressing a special briefing.

Abe was shot at about 11:30 am local time in Nara on July 8, east of Osaka, as he gave an election campaign speech on the street. He was taken to the hospital where Abe was pronounced dead at 5:03 pm.

During the state funeral ceremony, Abe's widow Akie carried his ashes into the Nippon Budokan Hall in the Japanese capital city where thousands of mourners gathered.

Japan had imposed tight security measures in Tokyo as representatives from hundreds of countries, including dozens of heads of state and heads of government participated in the state funeral.

Abe's funeral is the second state funeral for a former Prime Minister since World War 2. The first one was held in 1967 for Shigeru Yoshida. Other deceased Prime Ministers received a joint Cabinet Office and Liberal Democratic Party service.

The state funeral ceremony is the first major public event since new police security guidelines were implemented, including sniffer dogs at train stations and police patrols at Tokyo-area airports after Abe's assassination. (ANI)