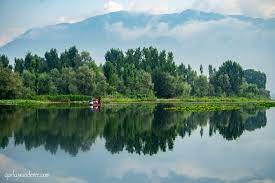 The Dal Lake, a popular tourist attraction in Jammu and Kashmir, is all set to get a facelift and breathe again as authorities appear determined this time to remove the weeds engulfing a large part of the lake.

For the first time in several years, the Jammu and Kashmir Lake Conservation and Management Authority (LCMA) has pressed into service over two dozen machines to remove the weeds. "There are two types of weeds. One is being controlled due to the presence of some species and the other is being removed completely," said LCMA Vice-Chairman Bashir Ahmad Bhat.

Bhat said the one being removed completely had covered an area of 6.5 sq km and this process is likely to be complete by November this year.

"In the past two years, we have been able to press over 32 machines for de-weeding while as nearly 500-600 men on a DBTL basis have been engaged and pressed into the service in the season to clean the water body," he said, adding that besides outsourcing the machines, two high-end weed grabbers have also been procured by the LCMA for the process.

"Besides working in the season, we managed to extract as much as weeds in the winter also last year," he said and added that internal channels were focussed this year and nearly 8-9 machines have been pressed into the services for navigation and other related things to beautify the lake further.

In order to beautify the famous Dal Lake further, several government agencies are ready to share their bid in decorating the water body. Besides LCMA's efforts, the innovative city projects that are all set to be executed would give a new facelift to Dal lake.

"A few projects have been taken up by Smarty City, which includes the Shalimar canal, cycling track on Nishat Sahthoo. We have also identified some places where the jetties are being upgraded or installed. The work on 8-10 places identified is going on at Ashai Bagh side and other places. We have also completed two parks where upgradation was needed so that the space is utilized properly," he said.

In five-six months, there will be a visible change in Dal lake, which is set to attract more and more tourists from all across the globe. "The Dal lake has already attracted tourists and with the new initiatives, the water body will be more scenic in the coming months," he said.

To make Dal lake more beautiful, six fountains will be installed in the famous water body soon and for which the places have been identified, he said.

With the new initiatives in process, the government is also mulling shifting the dwellers to other places, but the officials said it would take time to begin the procedure as the present focus is on connecting the houseboats with sewerage lines.
Pertinently, the shikara ride or the night stays at the houseboats have always remained in huge demand among tourists.

In the recent tourist season, almost all the houseboats remained jam-packed and the tourists were finding it difficult to get a space for even a single night at Dal lake. (ANI)