Stability of Indo-Pacific should be secured as global situation is challenging: Jaishankar 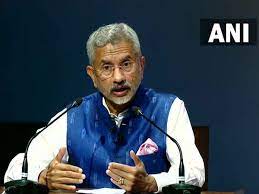 During his bilateral talks with US Secretary of Defence Lloyd Austin in the Pentagon on Monday, External Affairs Minister S Jaishankar said that the stability, security and prosperity of the Indo-Pacific should be secured as the global situation has become very challenging.

"So for me, our meeting today and my presence here today I do share with you that the global situation has become a far more challenging variety of reasons. Indo-Pacific in particular, it's important that the stability, security and prosperity of the Indo-Pacific should be secured which is best done amongst others," Jaishankar said during the opening remarks at Pentagon.

He also emphasised creating stronger defence industrial collaboration and military exercises between India and US during the talks.

Both the leaders expressed commitment to deepening bilateral defence cooperation and expanding information-sharing and logistics cooperation to drive deeper operational coordination between the US and Indian militaries, said Pentagon Press Secretary Air Force Brig. Gen. Pat Ryder in a readout.

The two sides are also looking forward to the launch of a new defence dialogue later this year as the United States and India work more closely across space, cyber, artificial intelligence, and other domains, the statement read.

Furthermore, Lloyd Austin and S Jaishankar underscored the value of the deepening collaboration between the United States, India, Australia, Japan, and European partners and both leaders reaffirmed their commitment to working together as steadfast partners to advance the United States and India's shared vision for a free, open, and inclusive Indo-Pacific.

During his opening remarks in Washington, US Defence Secretary Lloyd Austin sharply criticised China for "unprecedented provocations in the Taiwan Strait" during bilateral talks with External Affairs Minister Dr S Jaishankar at the Pentagon and said that India and US, the two great democracies are working together toward a brighter future for the Indo-Pacific as the world faces sustained challenges to peace, security and prosperity in the region and beyond.

"Our bilateral defence ties are just one way that our two great democracies are working together toward a brighter future for the Indo-Pacific. The United States In India, along with a dozen other Indo-Pacific partners, pushing to expand our region's prosperity for the Indo-Pacific Economic framework," Austin said.

Referring to QUAD- the strategic coalition of leading Indo-Pacific democracies comprising India, Australia, Japan and the US, Austin also underscored the current concerns over maritime security in Taiwan and Indo-Pacific.(ANI)