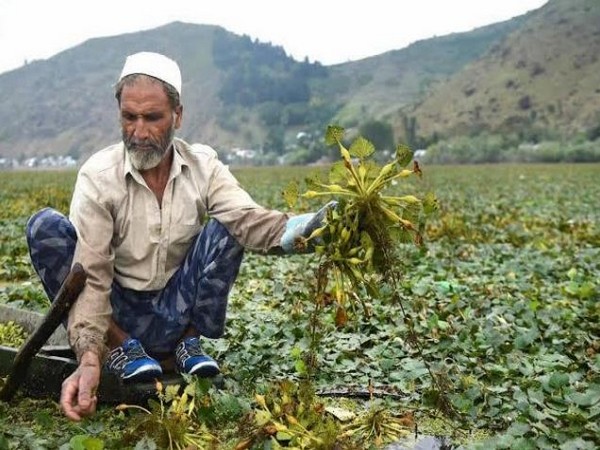 The Wular Lake in Jammu and Kashmir, which is known to be one of the largest freshwater lakes in South Asia, has a festive look with a large number of locals extracting chestnuts, according to a report.

The chestnuts extracted by the villagers are supplied to the vendors in Kashmir and outside the region as well. According to the report, the Bandipora district in northern Kashmir features in the list of the main supplier of chestnuts to the Kashmir Valley.

According to the official figure, the lake produces around 4 metric tons of chestnuts annually and 5,000 tons of fish of 11 different species each year.

According to the Wular conservation and management authority officials, at least 90 per cent of the water chestnuts produced in Kashmir are sourced from the Wular Lake.

"There is no systematic marketing facility available for the product extracted from Wular lake, which makes it difficult to estimate the revenue generated from the lake," the report quoted an official at Wular Conservation and Management Authority as saying.

The locals claim that as much as 80 per cent of the inhabitants are involved in extracting chestnuts from Wular to make a living.

"Chestnuts are the main source of income for the majority of people living here," the report quoted Abdul Ahad Panchoo, a resident of Suderkoot Bala as saying.

Abdul Rashid Dar of Baniyar village, who has been extracting chestnuts from the lake for the past 40 years, said that they are getting different schemes from the government for the purpose.

"All of us villagers who live on the banks of the Wular lake depend on it either directly or indirectly," he said, adding that chestnuts are the main source of income for the majority of people living here.

The Union Territory government is planning to develop a sustainable waste management model for all the peripheral villages of the lake, according to the report.

The J&K Wetland Authority has also approved the integrated management plan for the Conservation of Wular Lake to promote an integrated and multidisciplinary approach to the conservation and management of the water body.
The authorities also introduced a shikara (wooden boat) ride like in Dal Lake in Srinagar to promote tourism in Wular Lake.

The lake is also a habitat for migratory water birds. (ANI)