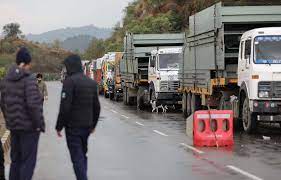 Srinagar, Sept 27 (GNS): Traffic authorities on Tuesday said that the Jammu-Srinagar highway, the only surface link connecting Kashmir Valley with the outside world, has been blocked due to ‘continuous shooting stones’ in Ramban district.

“Jammu-Srinagar NHW blocked due to continuous shooting stones at Cafeteria Morh Ramban,” the authorities said in statement, according to GNS. However, it said, Mughal road, connecting Shopian with Poonch & Rajouri districts, and SSG road remained through for vehicular movement. (GNS)

The pic used in the story is a file photo