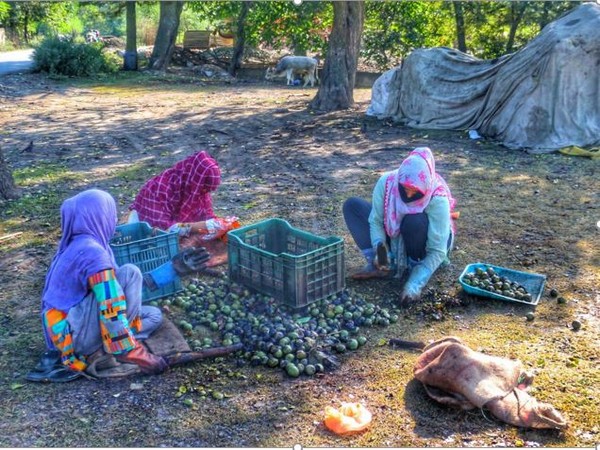 Manigam village in Anantnag district is coming up as a new belt for superior quality walnuts, which has earned it the name walnut village.

The village is about 20 km from the main town in Anantnag District in which almost all the households are dealing with walnuts. Nowadays, people in the village are engaged in harvesting and peeling freshly picked walnuts. Nestled in the mountains, Manigam village is always occupied with the hustle-bustle of the locals dealing with walnuts. Despite the beauty of the area of Manigam seer, the dull faces of the walnut businessmen speak a different tale.

A local resident Abdul Rasheed dealing with the walnut business in the village said that it is hard to sustain as the prices of walnuts have abruptly fallen down while the labour cost has increased alarmingly. "Till 2015, we used to get Rs. 1400 per kilo and now we make only Rs. 700-800 per kilo," said Rasheed.

Added that the walnut business is inherent, as everyone in the village is engaged to the age-old legacy in one way or another.

However, the village witnessed about 80 per cent people who were involved in the business of walnuts.

Another local resident (worker) said that from collecting to processing and packaging, every activity is hand-based. The workers also brave the consequences and gather walnuts from the trees that are atop the dangerously uneven hills. No media coverage was given to that. Everyone in power conveniently ignores our miseries," says a worker, while stuffing the walnuts in a box.

According to media reports, at least 4 casualties have been reported in the last three weeks in the Anantnag district. This happens while climbing the trees to pluck walnuts. "A 35-year-old worker died last week in kanelwan Bijbehara Anantnag from falling off the tree while plucking the walnuts.

However, in the Anantnag district, the walnut trees are found in every nook and corner of the district but the charigam village is different from others and is known for the walnut village.

Abdul Rehman a local resident dealing with the walnut business in the village while talking to the reporter said that this is our livelihood but unfortunately nowadays in district Anantnag, its production has been greatly reduced as rampant cutting of walnut trees was seen in Anantnag villages.

Kashmir accounts for 80% of India's walnut production. With their superior quality and taste, the Kashmiri walnut is a great source of nutrients and hence was widely in demand across India. There is immense potential for this product to make its place in the local and global markets. But nowadays it is very unfortunate that the department of horticulture is not giving much attention to walnuts because of which it will be left behind, he said

Added that, as far as the Preservation of Specified Trees Act 1969 is concerned, notwithstanding anything contained in any other law for the time being in force, no person shall fell any specified tree except under and in accordance with the terms and conditions of a permit granted by the prescribed authority under this Act, provided that a permit granted under this section shall not authorize the felling of a specified tree by any person other than the owner thereof.

There is a blanket ban on cutting and felling of walnut trees and permission for the same is to be sought from the Divisional Commissioner, who can provide such permission in rare cases, if the growth of a tree can endanger and risk the life or property.

The authorities have already passed strict orders and a person found involved in cutting walnut trees can end up in jail with a punishment of six months in the lock-up.

However, the practice is going unchecked in many rural areas and in many instances, the authorities are turning blind eye, a source said. (ANI)