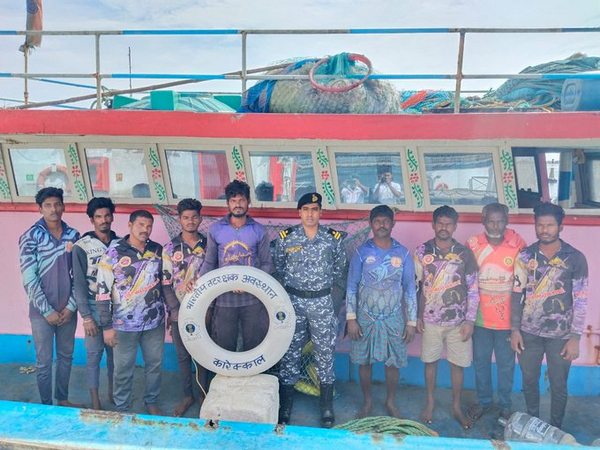 Nine Indian fishermen were recused from Srilankan waters by the India Coast Guard on Thursday after their vessel had an engine breakdown and drifted toward the waters of the island nation.

The operation was conducted in cooperation with the Sri Lankan Navy. The fishermen were later safely brought back to Karaikal. "Nine Indian fishermen rescued by @IndiaCoastGuard in coordination with Srilankan Navy. Vessel reportedly had engine breakdown and drifted to Srilankan waters. It was safely brought back to Karaikal by ICGS Annie Besant from INDIA-Srilankan IMBL," Defence PRO Chennai tweeted.

Earlier in March, India and Sri Lanka held the Joint Working Group on Fisheries, through virtual mode. Both sides also discussed cooperation between the Navy and Coast Guard of both countries in patrolling.

The two sides also discussed the existing hotlines between the Coast Guards and related operational matters including cooperation in tracking poaching, and prevention of environmental damage due to bottom trawling.

The Indian side highlighted the initiatives taken by the Central and State Governments to diversify livelihood options and reduce fishing pressure in the Palk Bay.

It also informed that infrastructure has been created to facilitate deep-sea fishing and promotion of alternative livelihood through seaweed cultivation, mariculture and several aquaculture activities.

The Sri Lankan side proposed a faster transition to sustainable fishing in the Palk Bay fisheries and also suggested that India can help them develop the aquaculture sector and the associated infrastructure in Northern Sri Lanka. (ANI)